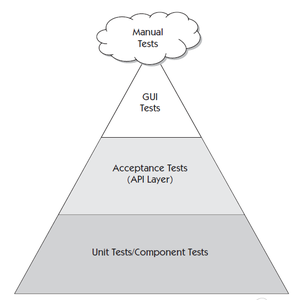 I've always considered that picture as an end goal, while an inverted pyramid has always been a bad example.

But what if you just joined a team that already developed an app, but has got no tests? Or if it is a startup? Which tier would you start automating? The test pyramid doesn't answer this. It shows the number of tests we should push to each level, but nothing about where to start.

My opinion may be counter intuitive, but start automating few high-level UI tests that accept essential business-facing cases. It could be several Selenium tests executing scenarios like sign up, opening an app page, etc.

The thing is that a customer doesn't care about unit tests, he wants an application to work as expected. Once you make sure most important things are covered, you can go down automating the lowest levels.

The end goal is still the test automation pyramid.